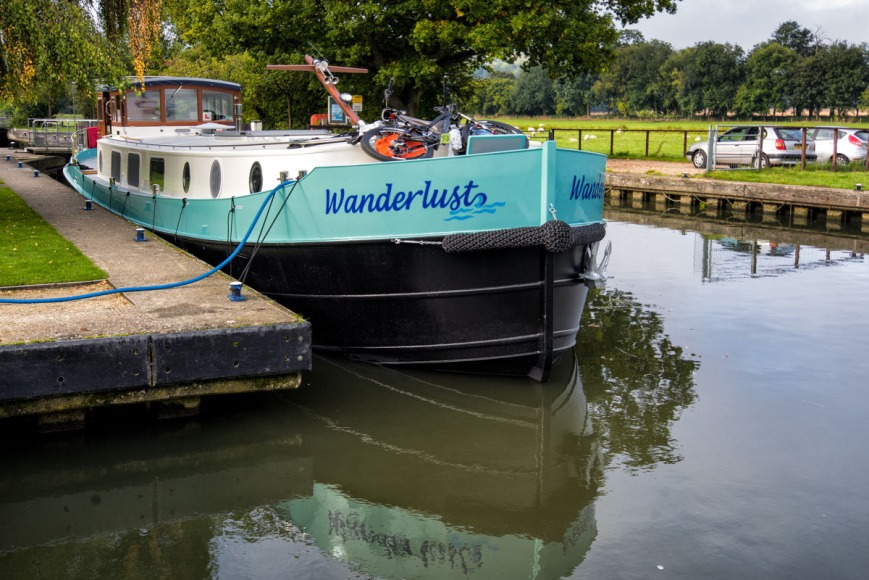 A while back I started a series of posts that described our barge buying experience. The intent was to share some of what were learned in process that led us to Wanderlust with those contemplating a similar path. Along the way life’s distractions set in and the articles languished amongst the long list of things to do. With this post, I continue the story of Wanderlust. Hopefully the gap to the next segment will not be as long!

To this point, the choices that took us on the path to a new built barge were straightforward. After our dog Gigi set in motion our barging future, the next steps, choosing to build new over buying used and picking Piper Boats as the builder, came fairly easily. And despite not knowing what the hell we were doing, the early part of the barge acquisition process seemed clear-cut. The next stage, defining what exactly we were going to have built, was far more complicated.

We had the basics to determine. What size barge did we want? Which engine should we install? Maneuvering bow thrusters are more or less standard on new build barges but should we add stern thrusters also? There are endless options for the interior layout. The engineering systems on a barge are a maze of interdependent choices. Having a house built to a custom specification is complicated; building a live aboard barge capable of moving along the inland waters of Europe is even more complex.

The mass of metal that would become Wanderlust sits under construction at Piper Boats.

Little can be defined until the barge size is chosen. As with anything, use determines the optimal size. Our desired cruising area determines the maximal size of our boat. For example, if we wanted to fully access Britain’s extensive network of inland waterways, we’d need a barge with a beam that would fit into the seven foot-wide locks. A wider boat will not make the crucial north-south passage and will not make it through the full extent of the British canal system. But cruising all of Britain, as pleasant as it might be, was not our goal. Our waterways of choice were across the Channel on the Continent and our barge could be wider than a British narrowboat.

A narrowboat works its way up the long flight of locks at Caen Hill. Even though the locks on the Kenneth & Avon are 13′ 6″ wide and in theory would fit larger barges, the canal is mostly used by narrowboats.

A step down in size from the largest industrial water routes is the “Freycinet Gauge” waterways of France and Belgium. Established in 1879 during the tenure of the French minister of public works Charles de Freycinet, this standardized canal profile assured that boats drawing less than 1.80 meters, shorter than 38.50 meters, and with a width less than 5.05 meters can go most anywhere on the French and Belgium. As of 2001, France had 3,604 miles of Freycinet-gauge waterways. These are the waterways that are the province of pleasure barges.

A propeller is not an optional piece of equipment.

Choosing a barge that just fits on the intended cruising waters is often not the best plan. And though full Freycinet-sized commercial barges have been converted for pleasure cruising, it is not a common choice. The luxury of space is offset by the challenge of navigating in a boat that by design barely fits into the locks. Indeed, many of the Freycinet-sized barges that have been fit out for full time living rarely move. They are left tied to the banks and used as permanent homes. A full Freycinet barge can make a great home on the water but for most they are not always a good choice for Continental cruising.

Roughly 636 miles of France’s inland waterways are tighter than the Freycinet standard. Full Freycinet-size barges will not fit through the locks on these waterways. In Brittany, full access requires barges to be less than 25 meters in length with beams less than 4.30 m. In reality, the waterways of Brittany are disconnected from the broader French network, so their restricted size does not usually impact the choice of a barge. More relevant are the canals in the south of France. A barge longer than 29.50 meters in length cannot get through all of the connected waterways of the very popular Canal des Deux Mers. Off of the Canal de Garonne, to reach Nerac and Condom and the end of the navigable Baïse, the beam needs to be less than 4.20 meters. To reach the extremes of France’s waterways, a barge smaller than the Freycinet standard is required.

Another important factor influencing the barge buying decision is the regulations. Regulations change as the length of the barge increases. There are major thresholds of requirements that occur as barges become larger than 15- and 20-meters. While the rules and laws are not insurmountable, they do inform the barge size choice.

The impact of the 15-meter threshold is notable on the Rhine River and in Germany. In Germany, piloting a barge over 15-meters in length requires a license acceptable to the German authorities.  (Update:  In May of 2017 Germany increased the length of what they consider a “Sportboote” or sport boat to under 20 meters.  This effectively means that an ICC license will now be accepted for boats up to 20 meters.)  Obtaining a proper German license itself means taking a test, written and oral, in German. The language of the exam presents an insurmountable barrier for many. There are ways around this problem. A French license acceptable to the German navigational authorities can be obtained. Nevertheless, license issues are an added hassle for taking a larger boat to Germany. 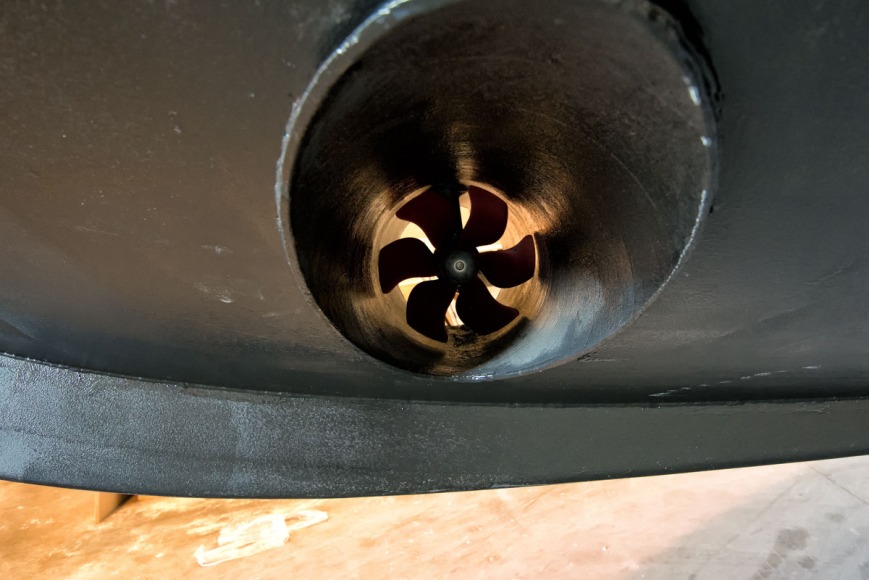 Obtaining a proper license can be even more difficult on the Rhine. Above 15-meters, some sections of the Rhine require a special license that requires, as a prerequisite, significant practical experience on the river. Obtaining a Rhine license to just pass through once or twice is not a realistic option. The best alternative for many is to hire a pilot for a Rhine passage. Life is easier with a barge shorter than 15-meters in Germany and on the Rhine.

For barges longer than 20-meters, the “Technical Requirements for Inland Waterway Vessels, EU Directive 2006/87/EC” come into play. These regulations mandate inspections and higher equipment standards. With boats longer than 20-meters an alternative pilot’s license to the ICC with CEVNI sign off can be required depending on the cruising country. Though many successfully navigate the regulations and enjoy the extra space of their large barges, the rules favor boats just under the 15-, 20-meter lengths as they maximize the usable space and minimize the regulatory hurdles.

Fitting out the interior: There are endless options for the inside of the barge.

Additional costs come in as the barge size increases. The size of the barge is correlated with the typical purchase price. The expense of building or refitting a barge also tracks with its size. And, as the barge gets larger, there’s more to maintain; operating costs increase. Navigation licenses go up in price for longer barges. Moorings, more difficult to find for a larger barge, are often priced based on the length.

There’s plenty of incentive to purchase the shortest possible barge. Against this is the desire to have the most comfortable living space. As a consequence, boats with wider beams are favored. The size of the beam matters a lot for internal space. Indeed, increasing an 18-meter barge’s beam by half a meter impacts the living space more than increasing the length of the barge from 18- to 20-meters. 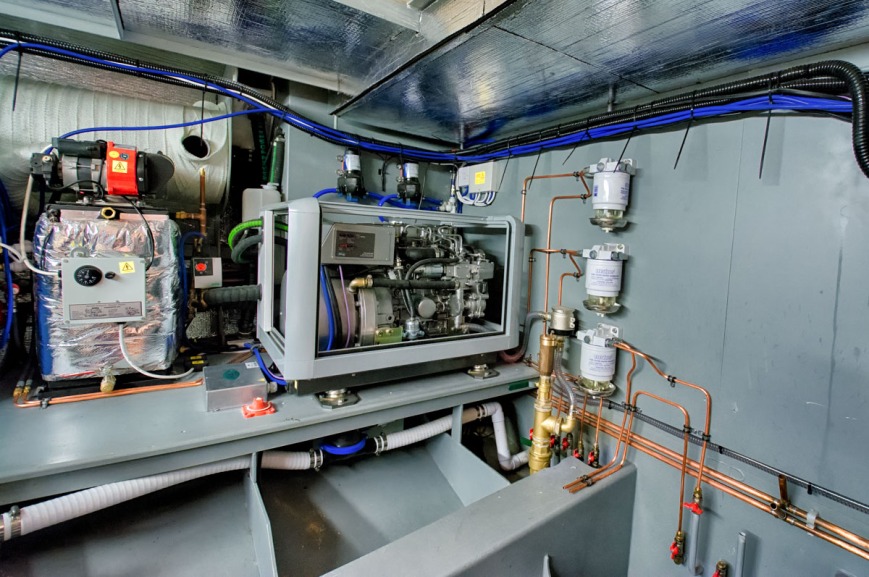 For Wanderlust a generator is one of the four ways to get electrical power. A plug to a shore circuit, the main engine’s alternator, and solar panels are the other options.

The desired cruising range must be superimposed on the intended use of the barge. Will the boat be used on and off as a holiday home or is it to be a full time residence? Will hoards of friends and family come along or will it mostly be just two? Many factors influence the size of the desired barge.

For us we expect to make our barge our permanent residence. And though we don’t expect masses of family and friends to come along we’ve been told that once you have a barge you’ll find that you have more friends than you knew you had.

Given all of the considerations, how did we choose our barges size? 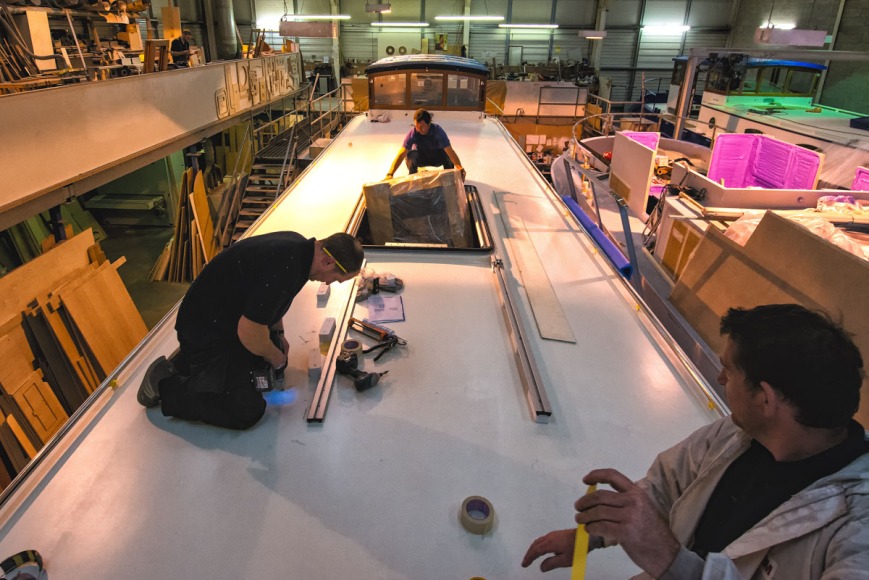 The lads at Piper Boats work to finish up the final details on Wanderlust days before the launch.

Looking at the inside of a few barges helped us make a choice. Narrowboats were ruled out; we aren’t planning to cruise much in the United Kingdom and, as cute as they might be, the interior space is very limited. As we looked at the inside of barges it was clear that for livability, internal layout could be as important as the external barge size. A well laid out shorter barge can have a more practical living space than an awkwardly configured larger boat. We decided that a 15-meter barge, with an ideal plan, might just work for us. If not 15-meters, we would be thinking about a barge just shorter than the 20-meter threshold. There didn’t seem to be much incentive to be over 15-meters but not near 20-meters. Having Piper Boats build anything larger than 20-meters would be far more expensive, so a larger barge was ruled out.

We were now focused on barges just under the magic 15- and 20-meter thresholds. At the time of our selection, Piper Boats had just developed their “Monchique-class” barge, an interesting 49 x 14 foot design that put the length just under 15-meters with a 4.26-meter beam. The Monchique maximizes space with an under the wheelhouse passage and a raised external deck and steering position. We liked the size. Piper’s prototype boat Monchique handled easily. Unfortunately we couldn’t quite make the interior layout work for us. The fixed metal work defined the interior spaces in way that made getting two proper bathrooms and a large salon, a requirement for us, difficult. If we’d taken on the added expense of tweaking the metal work, the just under 15-meter design might well have worked for us. But without a redesign a larger boat appeared to be a better option.

So, after much thought, we opted for a 65-foot by 14-foot barge. It’s just under the 20-meter threshold with the practically wide 4.26-meter beam. We would have preferred an even wider beam–a 15-foot beam seems ideal for a 65-foot barge–but that also would have meant adding the expense of redesigning the metal work. In the end, there’s always a compromise.