Inside a covered market, one of our happy places

When it comes to buying food in France, there are choices. The smallest villages, if they have any shopping at all, might only have a mini-market or two, the last resort of a desperate shopper. Larger communes have supermarchés or the even larger hypermarchés, superstores that combine a supermarket with a department store. Supermarchés and hypermarchés are becoming increasingly popular with the French and are pushing the traditional options, the local butchers, bakers and weekly markets out of business.

The best option for buying food, if available, is usually the regular weekly markets. Any decent sized town usually has a market day at least once a week. Often these are marché couverts or covered markets that are held inside purpose built buildings. These regular markets often offer a staggering array of fresh ingredients. 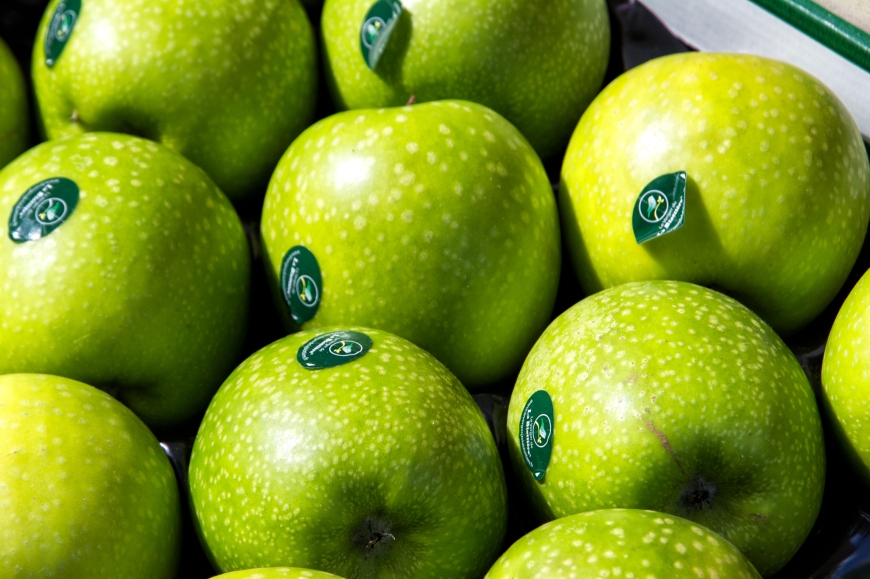 Surprising to us, the vegetable selection and quality in France is typically modest, at least on the Californian scale. Though the lettuce is amazing, a French market is not a good place to obtain the dinosaur kale, pak choi, and gai lan that we are used to finding in the Bay Area. Fortunately the lack of diversity of cook-able greens is offset by the wide selection of proteins.

Twenty plus types of fresh fish, not counting the bounty of shellfish, are commonly available from a fishmonger’s stall at a typical French market. Past the fish are endless options for poultry and meat. All cuts of duck, goose, guinea fowl, quail, pheasant, pigeon, turkey, and chicken are reliably available. Most of this bounty comes from France. The quality is high. Indeed, there might well be five different types of chicken on offer including many prized varieties having appellation d’origine contrôlée status like Bresse chicken. 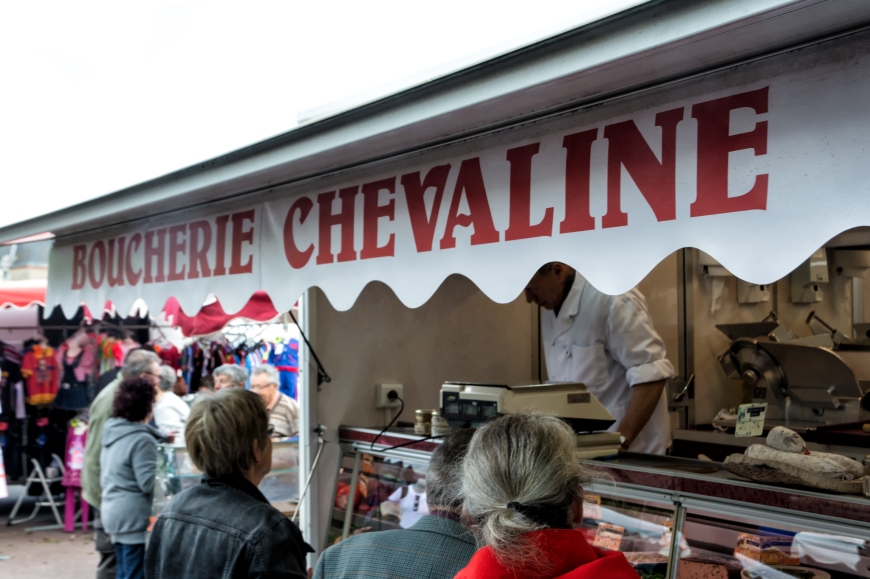 Yes, they eat horse in France.

A similar diversity extends to the meat counters. Pork, lamb, venison, rabbit, horse and beef are often available. The butchers offer all of the cuts including the offal. Looking for pork brains for the your scrambled eggs in the morning or ox tail for diner? Most likely you will find it in a French market. If it comes from an animal it will likely be sold in a French market.

The fresh meat is only the start. Charcuterie is an art form in France and there is a wide variety of artisanal pâtés and sausages available. Very popular is andouillette. Not to be confused with andouille, true andouillette is rarely seen outside France. It has a strong, distinctive odor related to its lower intestinal origins and components. More plainly stated, andouillette smells like shit. Personally I can’t get past the odor but its many devotees passionately prize andouillette for its flavor and smell. 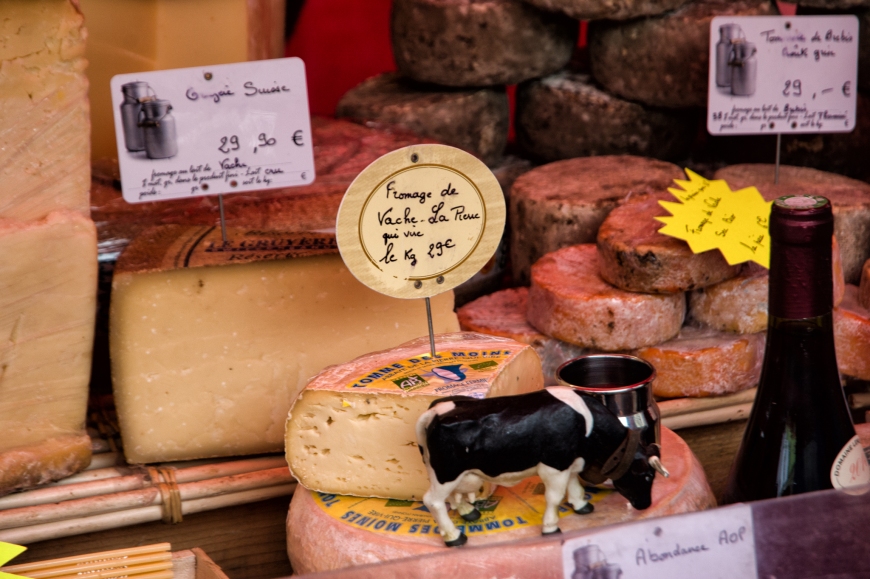 A visual clues just in case we didn’t know that vache means cow in French.

And then of course there is the cheese. Unless it has been smuggled past a nosy beagle at a U.S. airport, the best French cheese does not make it into the States. The cheese on its own a more than sufficient reason to travel to France. One can’t fully experience French cheese unless they are in France.

With the variety and quality we prefer to shop at the weekly markets. But if we miss the market day, there are other options. The first choice is usually a butcher shop. Though this is rapidly changing, in France many small towns often have at least one good butcher and bakery. 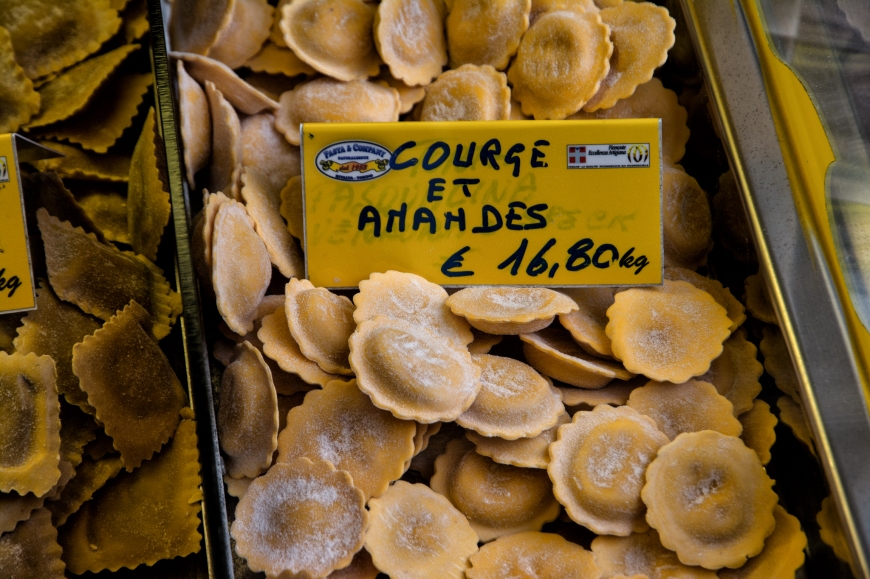 Imported food does not have far to travel in France.

Duck gizzards cooked slowly in duck fat are available at most supermarkets in France.

Sometimes the boucheries and markets are not open when we need them. Our best option then becomes a supermarché. The basic super market is little changed around the world. Indeed, French super markets are laid out in much the same way as they are in the States. But in France there is a difference. Ingredients that in the States would be exotic and expensive are commonly available at the local supermarché. Snails, duck gizzards confit, and foie gras can be found in even the most basic supermarchés. In France even working class super markets carry a variety of proteins that would rival or surpass even the most upscale gourmet grocery store in the States.

Local tomatoes from the Yonne Valley

One thought on “Shopping for Food in France”