Sometime well after we took delivery of Wanderlust her Owner’s Manual arrived on board. As we learned later, the manual is a legal requirement of the build. According to the Recreational Craft Directive or RCD, the boat manufacturers must provide an owner’s manual with their craft. It is an obviously sensible rule.

Wanderlust’s 34-page manual has basic information about the boat, its operation, and safe use. It also includes technical details though these are not reliably accurate. Indeed some of the information is dead flat wrong.

Some examples: Wanderlust’s freshwater tank is listed a 1440 L in the manual, the build contract promises a 2200 L tank, but in actual fact the net usable tank volume measures at around 1850 L. The manual says that sewage holding tank has a capacity of 900 L. The build contract specifies a 650 L with the builder saying “we will increase size”. (We had requested a larger black tank during the build negotiations.) Subsequently I’ve measured the outside dimensions of the black tank. Its capacity is around 546 L. 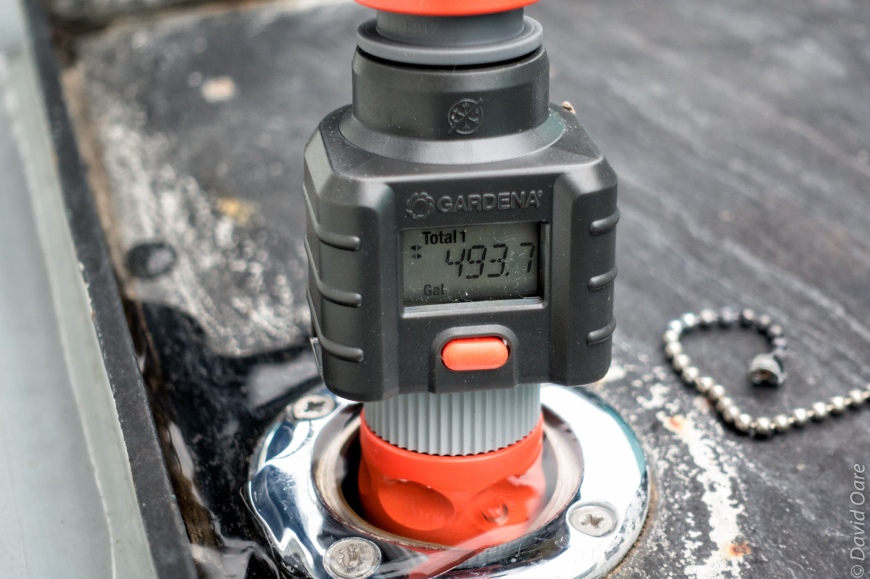 I don’t trust the manual for the fuse ratings either. The actual fuses installed sometimes differ from what is listed in the manual. And the fuses installed don’t always agree with what the equipment manufacturers specify. It’s best to refer to equipment supplier’s manuals before work is done. Wanderlust’s Owner’s Manual is not a reliable source of accurate information.

But that’s just sniping. With work the problems in the manual can and will be corrected over time.

Also included in the manual is the Declaration of Conformity that has been completed by the builder. The declaration includes a signed statement where the builder’s employee attests that Wanderlust’s build complied with “all essential requirements in the manner specified”.

This phrase fit our expectations. Wanderlust’s construction was supposed to conform to the relevant standards. This passage from the builder’s brochure assured us that the proper procedures were in place:

“The construction process is approved by Human Performance Improvements who are an International Notified Body based in the UK. Each craft is built to stringent standards and all boats conform to the Recreational Craft Directive and come complete with CE mark….”

Only after Wanderlust was launched and problems developed did we start looking into the sea of regulations. Immediately there were questions. What exactly is the Recreational Craft Directive? What are the “essential requirements”?

Wikipedia says that the Recreational Craft Directive is a “European Union directive which sets out minimum technical, safety and environmental standards for the trade of boats, personal watercraft, marine engines and components in Europe.” Digging deeper we learned that these standards include topics such as the electrical systems, exhaust emissions, flotation, fire safety, emergency egress, and the fuel system. The RCD standards emphasize matters concerning safety and proper operation of the craft. Distilled down, the RCD becomes a list of “essential requirements.” Effectively these are the things that must be done for a craft to be judged of merchantable quality in the EU. 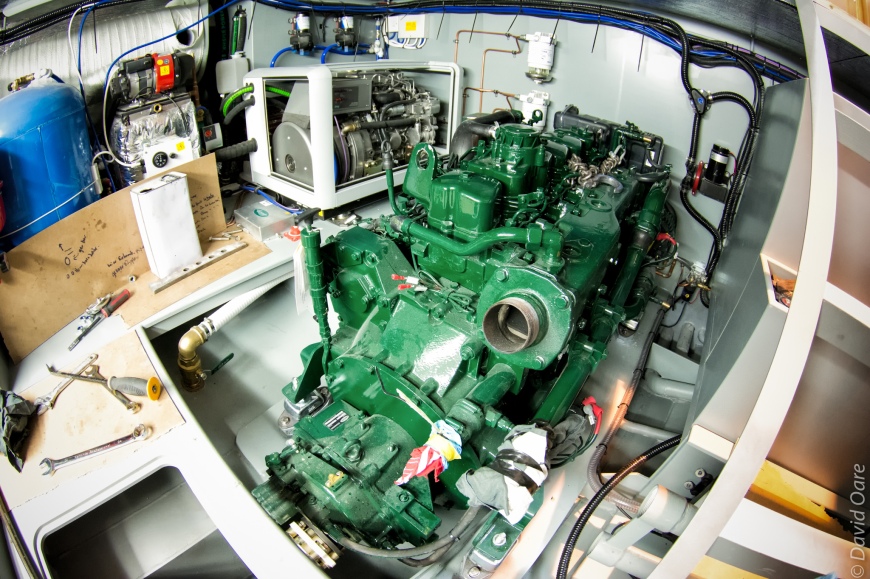 The essential requirements outlined in the RCD governs many items in the engine compartment.

The EU’s Recreational Craft Directive dovetails with the international standards developed by the International Organization for Standardization. (For some reason the name is abbreviated as “ISO” rather than “IOS”.) ISO is an independent, non-governmental organization with 162 member states. Harmonizing the standards across borders fosters international trade. It assures that numerous products produced around the world have a base level standard. The standards are not an example of regulatory overreach. Indeed, the trading rules set a low bar of prudent requirements that should easily be achievable by any manufacturer.

In the UK the EU’s RCD is transposed into UK law by way of the Recreational Craft Regulations (RCR). RCR provides the teeth for the enforcement of the RCD.

On the surface, it seems like the rules governing the building of boats offer a customer assurances that construction will be performed to an internationally accepted standard. In reality it is not straightforward. The certification process is devoid of transparency. A customer seeking to determine that his or her boat was constructed according the standards will find considerable expense and numerous challenges.

The first hurdle is finding the standards themselves. It is very difficult to find a complete copy of the relevant ISO or RCD rules without paying a substantial sum of money. This system is perplexing. These documents are nominally adopted by governmental agencies to aid trade and commerce but then are not readily available to the consumer who buys the product. Instead, the standards are copyrighted and expensive to purchase. For us to purchase a full set of the standards that cover Wanderlust’s build it would cost thousands of dollars. Consequentially, manufacturers certify that their products conform to standards that the customers cannot practically see. Why does that make sense? 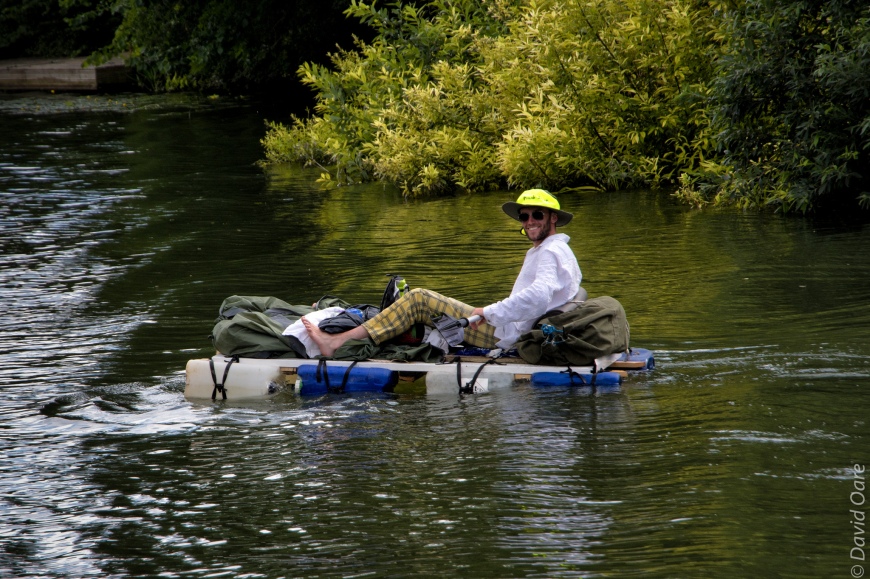 The Recreational Craft Directive does not cover every craft on the waterways.

Perhaps naively I’d assume that electronic copies of any certification reports held by the Notified Body would be made available to any customer who asks. It would seem to be in the best interests of all parties. But it’s not so simple. The certification documents are considered proprietary information. Unless the sharing of the reports is directly specified in the build contract or comes out under the freedom of information act subsequent to a criminal proceeding, the documents do not have to be shared. Indeed, even launching an inquiry with the Trading Standards, the governmental organization tasked with enforcing the RCD, does not assure the release of the reports. 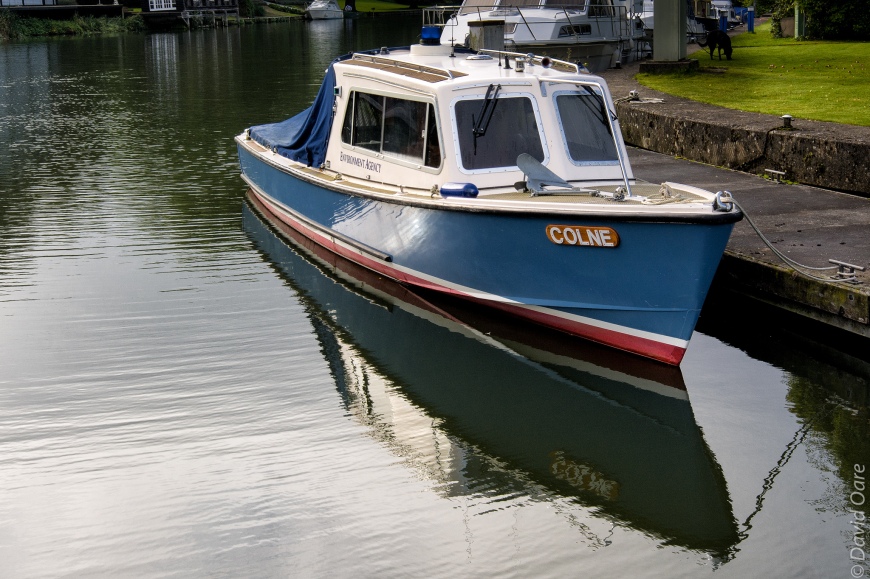 Undoubtedly the restriction of public access to the Notified Body filings is important in some industries. It would be unfair to make a company publicly disclose its closely guarded trade secrets in a regulatory filing. Indeed if Samsung were forced to make a public report to the regulators, its competitors in the cell phone market might find out key pieces of technical information about their phones. But for a typical boat builder, there simply is no proprietary information that requires this type of protection. Restricting access to the documents simply has one main purpose: It reduces the builder’s liabilities.

Limiting access to the Notified Body reports lessens the chances that a customer will identify places where a boat has been wrongly certified. It diminishes a disgruntled customer’s ammunition in a civil suit. Further, as violations of the build standards are considered criminal acts, keeping the certification documents secret makes investigations more difficult; it decreases the chances that the builder of a non-compliant craft will be fined or imprisoned for violations. For boat builders, restricting access to the build certification documents means that there can be less scrutiny. On the flip side, for boat buyers, the lack of transparency fosters doubts that a boat has been built correctly.

In the UK, if a customer feels that their boat has been wrongly certified, there is only one option, launch an inquiry with Trading Standards. Even here there are challenges. There is only one Trading Standards officer per county due to budget cuts. Customers of UK boat manufacturers are often resident outside of the county or even the country of the Trading Standards office. A foreign customer is asking that a member of the local government to scrutinize a company that presumably pays taxes and employs people within the county. Further, the Trading Standards officer is typically not expert in the boat building process. The regulatory system assumes that the privately held Notified Body will have the technical expertise to evaluate products and not the governmental agency. It is incumbent on the customer to hire, at their own expense, an expert to determine whether the relevant build standards were followed. 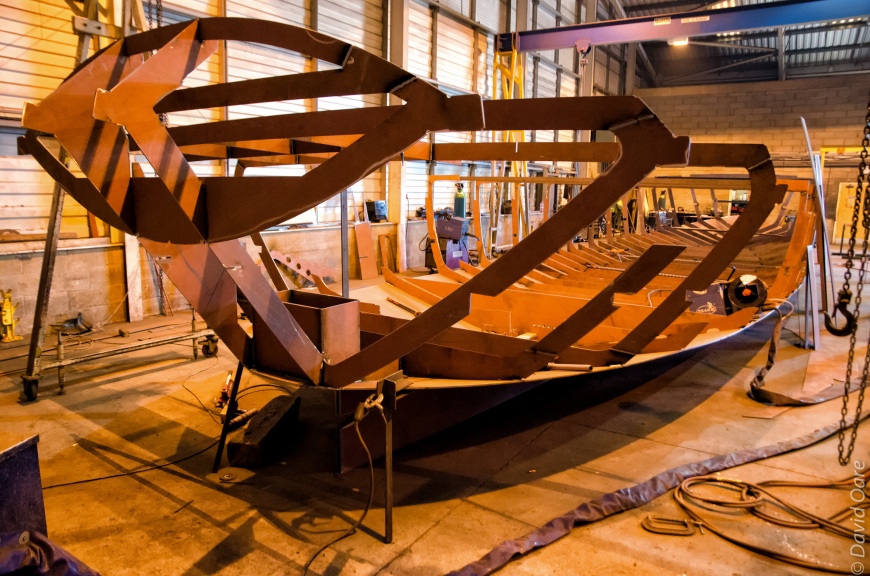 The RCD impacts even the earliest stages of a barges construction.

(Don’t take this as an indictment of Trading Standards, per se. My interactions with the Trading Standards have been completely satisfactory. They are doing their best. The problems come from how the regulatory system is configured.)

And then there is the issue of timing. Complaints to Trading Standards must be made within three years of the product’s delivery. As we learned, reporting a problem to the builder and giving the opportunity to make repairs does not count for timing purposes; it doesn’t matter when we reported Wanderlust’s blowback problem on fueling to the builder. Intentionally or otherwise, by delaying a response the builder effectively can wait out the three-year window for a criminal complaint.

To sum things up so far:

With the barriers that are in place does this system provide anything more than a façade of protection for a consumer? From my perspective it seems clear that the RCD/ISO protocols protect the manufacturers far more than the customers.

Wanderlust in the finishing shop

An informed potential customer has the ability to level the field, slightly. Adding a clause to the contract that requires the builder to share all of the certification documentation is possible. If the boat builder objects to adding such a clause, the customer should walk.

If you think you can trust your builder and feel that you don’t need a disclosure clause in the contract, think again. In our case we comforted by this statement in the builder’s brochure “Dutch Style Barge Specification”:

“Copies of the notified body reports are available for inspection at our works.”

It was a reassuring statement at the time that we signed the contract. We were told that all of the Notified Body documentation that we could want would be openly available for viewing. It seemed to provide good cause to not insist that this detail is spelled out in the contract. That was a mistake.

Since the fuel system problems have developed we’ve tried several times to get the certification documents for Wanderlust from our builder. In response the builder told us that they had given us all of the information that they are contractually required to provide. The statement in the brochure was a meaningless promise. Indeed, the builder would not even give us the name of the consultant employed to assure that the regulatory requirements were met.

The reticence to share the supporting documentation for Wanderlust’s build seems odd. If as a builder you had made your best effort to comply with all of the relevant regulations, wouldn’t you be quick to share the documentation with a customer? Why show any reluctance?

My foray into the labyrinth of the trading regulations has left me with more questions than answers and more concerns than comforts. In the end, I have to wonder: Are there sufficient safeguards in place to protect the customers of boat builders in the UK?

6 thoughts on “The Build Standards: Are Customers of Barge Builders Really Protected in the UK?”