It is possible that we’d travel to Germany just to have a beer.

Across the canal from Wanderlust’s place in Mulhouse’s port de plaisance is the city’s international train station. Aside from allowing us easy access to rail transport and the city’s tram system the location also makes renting a car convenient. Car rental agencies in Europe are reliably located near major rail hubs. With friends arriving soon from the UK, having a car available seemed a good idea. It would give us a chance to explore the area.

On the first trip out we headed across the Rhine today to see the Three Countries Bridge, a structure whose name promises more than its reality offers. The Three Countries Bridge crosses over the Rhine linking the commune of Huningue France to Weil am Rhein Germany. By my count that comes to two countries, not the marketed three, a fact we learned only after we arrived to visit the bridge. In the bridge’s defense, its foundations lie within the greater metropolitan area of Basel Switzerland, the Eurodistrict trinational de Bâle, so it sort of counts as three countries, as long as you don’t look carefully at a map or at the definition of “country”.

In any event the beer in Germany is a sufficient reason to cross the border; it lived up to its promise. And though the bridge didn’t provide direct access to three countries, it was interesting to cross over the Rhine on foot and watch the big commercials barges head into Basel.

We did ultimately visit a third country, though not by a bridge, when we looped back to France through Swiss Basel. The route required two customs crossings in less than five miles. Thus we figure our outing qualifies as a “three countries and a bridge” trip.

The rental car also let visit the route des vins d’Alsace, the Alsatian wine tourism route. Previous trips had taken to the middle section of the route near Ribeauville and Riquewihr, but never near route’s southern extreme in Thann. Wine tasting and sightseeing on the Alsatian wine road has never disappointed, both for the wines and for the scenery. And so it was this time too. The Alsace is an under appreciated as a wine appellation and as a touristic destination.

Aside from allowing us to explore some of the region’s attractions, a car could in theory have been useful for reaching the Mulhouse’s thrice weekly market, les Halles du Marché du Canal Couvert. But we didn’t take the car there. Instead we rode the bikes, pulling our trailer, from the port to the market. Google says its a four kilometer round trip but we always got a little lost on the way back making it a much longer ride. If the trend continued we would likely have given up on the bikes and driven over.

Mulhouse’s main market is said to be the largest in France’s Northeast. I can believe that. It is sprawling. And it is a good market, for sure, a bit cheaper and more downscale than our favorite, les Halles de Dijon, but still worth the effort to get to. We always have a tendency to be sticky in the places where there’s a vibrant market. It’s hard for us to cut the umbilical cord that supplies the best French ingredients to the galley. That was certainly a factor influencing an extended stay in Mulhouse. 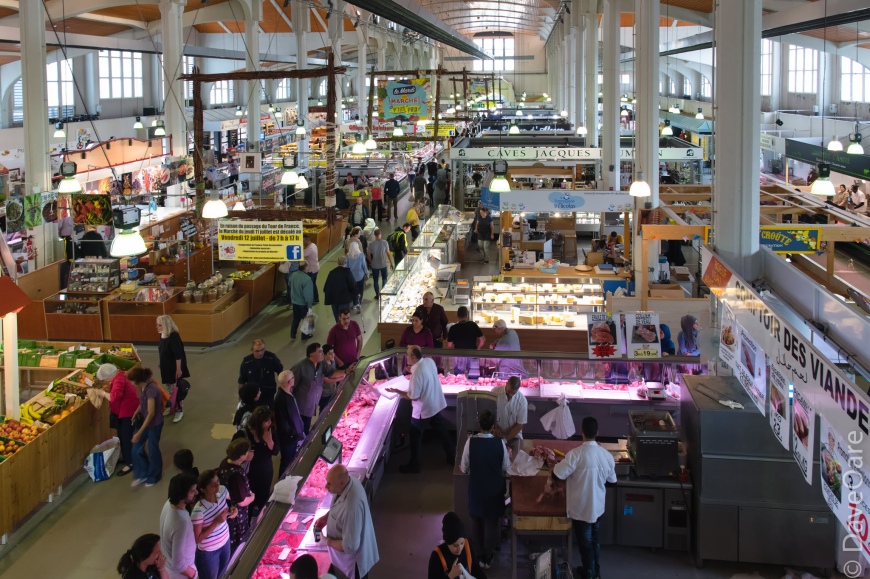