Papeterie Zuber Rieder viewed across the Doubs from the nature mooring.

Saint Jean de Losne was proving to be our Hotel California: We could check out anytime we liked, but we could never leave, at least not for good.

Wanderlust’s starter battery concerns had us once again returning to a port that we had struggled to depart. Don’t get me wrong. We like SJdL and the people there. We just seriously want to move on from the area. After all we did not name our barge “Wanderlust” because we imagined it staying in one place.

After giving up on receiving reinforcements for our compromised starter batteries in Besançon we arranged for the batteries to be delivered in the port office in Saint Jean de Losne. We hoped it would be a more reliable arrangement. Thus soon after the online battery store agreed to deliver to SJdL we pulled Wanderlust’s ropes up and left Besançon’s public pontoon near la Cité des Arts. With the wheel turned to port we spun about and headed out downstream.

Heading up river on the way into Besançon we took the tunnel under the citadelle. This subterranean water passage shortcuts the horseshoe bend (“boucle” in French) of the Doubs at its throat, substantially reducing the cruising distance for through traveling boats. This time, going downstream, we decided to forgo the tunnel shortcut. Instead we navigated the loop of river that envelops the commune’s old town. Though it’s the slower route it’s worth it for the gradually evolving views of the city it presents.

Both the tunnel and the loop routes involve one lock. Both of these locks are unusual. The lock for the tunnel is actually partially underground, something we’ve never seen before. The boucle route’s lock is unique to us as the only boater operated manual lock we’ve seen in France. 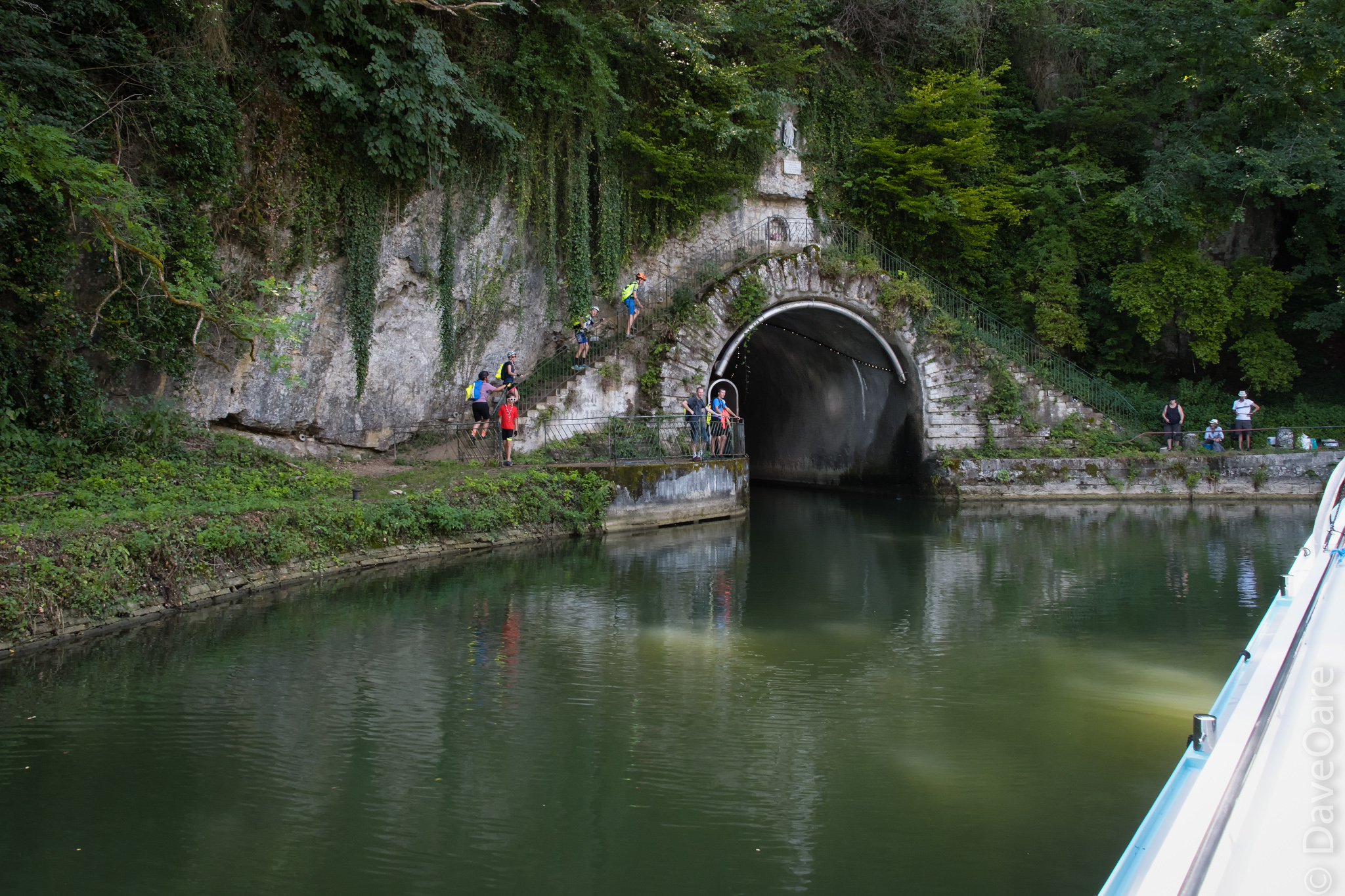 Downstream of Besançon the waterway alternates between segments river and bypass canal. Roughly a mile and a half from the exit of the Thoraise Tunnel we reached spot labeled as a nature mooring in the Breil Guide. On the way up river we drifted slowly by this riverside quay tempted to spend the night. It looked idyllic with an adjacent weir and a photogenic paper mill on the far shore reflected by the calm waters of the river. We considered stopping for the night. But at the time there was uncertainty about the rain and rising river waters. It seemed best to continue to Besançon. As we moved the throttle forward we mentally reserved the nature mooring for our return journey.

But it wasn’t a straightforward decision to stop on our way back as we imagined on the way out. We were now contending with a potentially compromised starter battery. Getting stuck at a remote mooring is undesirable. And in this case it is definitely remote. As far as we could tell, the nearest road is 2.5 miles via some sort trail. It’s hardly ideal if we needed to replace a heavy battery from shore. In the end beauty outweighed battery and we decided to risk a night off of shore power. Once again, to be safer, we ran Wanderlust’s generator longer than we normally would have to keep the battery charged.

The next morning there was the now familiar trepidation when I went to start the engine. But once again, the engine turned over. Wanderlust continued on her way downstream.

Our next stop was a return to familiar Dole. Once again it’s a mooring without an official electrical power outlet. But by this point the engine had started twice after overnight stays off shore power and we had become more comfortable that it would start again the next morning. Not that we had much of an alternative on this serviced-mooring free gap. But at least in Dole help was near. We could easily rent a car and go and pick up the new batteries from Saint Jean de Losne if we had to.

The following morning in Dole Wanderlust’s main engine started. It was not something we took for granted. And was there just a hint of hesitancy or was I imagining it? At this point it didn’t matter. The engine would run continuously until Wanderlust reached Saint Jean de Losne.

With the drought induced water shortages the canals all around us were closing. We might be able to scratch together some short river trips but this year’s grand cruising plans were no longer possible. With the certainty of a shortened season I guess we could have tried to linger and enjoy the water as much as possible squeezing out as much cruising as we could. But inevitably it would mean fighting for mooring spots with the fleet of boats fleeing the canals and also now constrained to be on the rivers.

Rather than fight for the dregs of a cruising season we moved onto other things. Thus we decided to park Wanderlust and to head to the Baltic on a long dreamed of road trip. With this choice Wanderlust picked up speed heading back to the barn like an old rental horse. Our cruise on the beautiful Canal du Rhône au Rhin came to an abrupt end.

The replacement batteries did indeed meet us in Saint Jean de Losne as planned.

I kept the heat damaged starter battery for a while using a surplus maintenance charger to keep its pulse ticking. I figured that it might function as an emergency replacement or I even might use up its remaining life as a primary if it still had life left.

Eventually I got my hands on a handheld battery tester. The tester told me that the remaining starter battery that we limped back from Montreux with was indeed seriously compromised. It was able to hold a small fraction of its original capacity and what charge it had it lost quickly. With freedom to experiment I could see that the battery likely would not have started the main engine if it was left 24-hours off the charger. There might have been enough juice left the start the smaller generator motor, but even that was far from certain. What seemed at times to be overly cautious stretch of battery management on our retreat in retrospect turned out to be a good idea.

The new “Extreme” batteries in the battery box: The white box on the right is a remote thermometer.

Our new charger for the bow thruster batteries allows us to monitor their status using a phone app.

The logbook says it is 82 kilometers with 27 locks from Besançon to Saint Jean de Losne. Wanderlust’s engine ran for 13.8 hours on this stretch. There were two overnight stops, one at the nature mooring near PK 57 and one in Dole’s port. Water is available in Dole but otherwise there are no services available.